LAPLACE, LA -- "Roxanne Moyer wondered why managers at her husband's worksite would allow an obvious dangerous condition to exist. Workers could be so "close to molten steel [that it] just poured over on them." Her husband, Samuel Moyer, 32 died earlier this month at Arcelor Mittal's LaPlace, Lousiania steel mill in exactly that way. He was fatally burned with molten steel.
Mrs. Moyer sounds like a generous and forgiving soul, saying:


'I don't want it to happen to anybody else. And they've already changed things there. We've talked to fellow workers, and they've already put up a shield there and you can't even get that close to it anymore.'

I'm not so tolerant. How is it that the world's largest steel company, with revenues topping $78 Billion in 2010, can ignore such a hazard? They didn't do anything about it until after a worker was killed?
Part of the problem is there are no meaningful consequences for employers who violate safety regulations that lead to worker injuries or deaths. Under workers' compensation law, it is next to impossible for a surviving family to sue their loved one's employer. Under OSHA, the maximum penalty for a serious violation is only $7,000. That penalty figure hasn't been updated since 1991; in today's dollars its only worth $4,400."

Read the whole story
Posted by globalaction at 7:06 AM 2 comments: 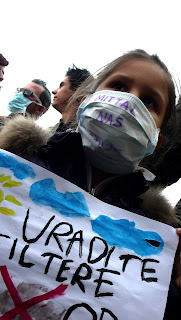 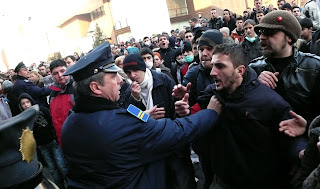 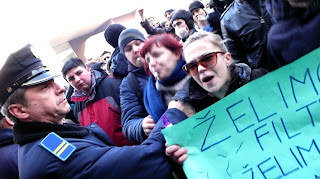 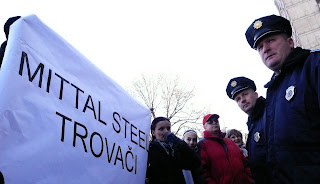 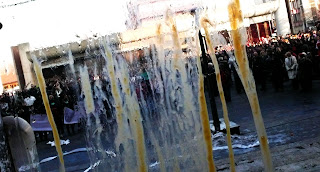 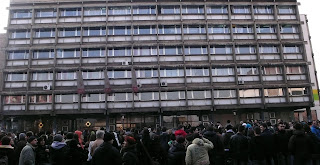 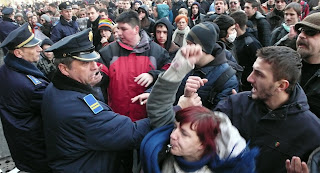 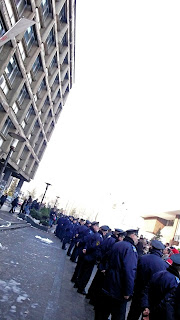 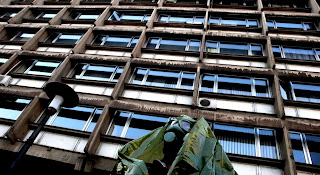 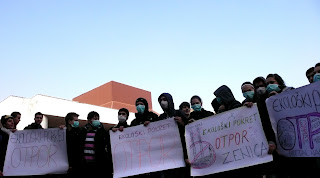 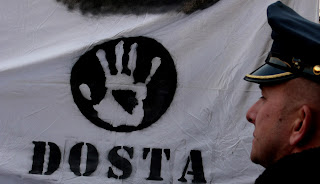 photos: Almir Alic
Posted by globalaction at 11:01 AM 1 comment:

Email ThisBlogThis!Share to TwitterShare to FacebookShare to Pinterest
Labels: Zenica 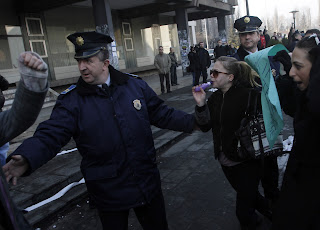 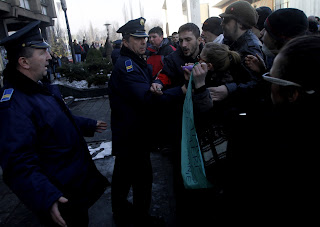 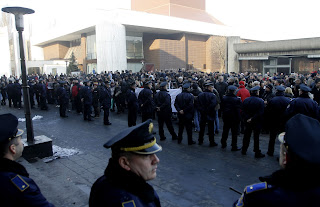 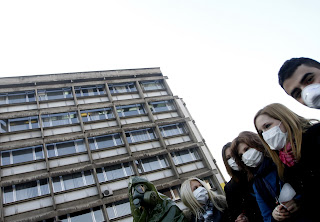 Citizens of Zenica, Bosnia and Herzegovina, are protesting for the third week against ArcelorMittal's failure to fit pollution filters at the city's steel plants. The air quality is very bad, and concentrations of PM 10 and  SO2 have repeatedly exceeded 'alert' levels. In addition to these  harmful pollutants Zenica citizens are most concerned about  carcinogenic pollutant benzene and volatile organic compounds in the  air, which have not been measured for more than a year. The last measurements of benzene showed very high hourly values.

Photos: Dado Ruvic
Posted by globalaction at 8:26 AM 4 comments:

Email ThisBlogThis!Share to TwitterShare to FacebookShare to Pinterest
Labels: Zenica

ArcelorMittal fined EUR 6000 for water pollution in Bosnia and Herzegovina 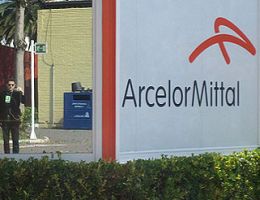 BOSNIA -- "The Federal Inspectorate has fined ArcelorMittal 13 300 KM [around EUR 6000] for yet another pollution incident in the River Bosna in Bosnia-Herzegovina, just a day after the company reportedly denied that it was the cause of the most recent incident.

Laboratory analysis of samples taken during the pollution incident in the Zenica area has confirmed that the substances involved originated from ArcelorMittal Zenica's slag landfill.

Very high pH values, electrical conductivity of TDS (total dissolved solids) and suspended particles were registered, and the confirmed values of the tested quality parameters are characteristic for waste waters from a tailings basin with slag, according to the analysis.

The results of the published chemical analysis show that wastewater from the slag landfill caused the pollution incident on 15th and 16th August at Banlozi.

The Agency for the Sava River Basin recommends that the Inspectorate bans the discharge of such wastewater into waterways, or that pretreatment is carried out before its release. The Inspectorate is planning to meet with ArcelorMittal next week to discuss wastewater treatment.

BRUSSELS, Belgium -- "The County Social Development Fund established by the government of Liberia and ArcelorMittal Liberia is failing to address the needs of communities impacted by the operations of ArcelorMittal in Liberia. This is the key conclusion of a new report released by Sustainable Development Institute from Liberia, Friends of the Earth Europe and Global Action on ArcelorMittal, a coalition of civil society groups tracking ArcelorMittal operations worldwide,"

-- press release, Global Action on ArcelorMittal.
Posted by globalaction at 10:56 AM 2 comments:

Email ThisBlogThis!Share to TwitterShare to FacebookShare to Pinterest
Labels: Liberia

LUXEMBOURG -- On 21 October 2009 the European Investment Bank’s board of directors approved a loan to ArcelorMittal worth EUR 250 million for a research and development programme said to be all about bringing environmental added value to the company's European operations. Couldn't a company the size of ArcelorMittal be expected to either fund the project out of its own resources or be able to access commercial loans, leaving advantageous European Investment Bank funding to companies more in need? Frustrated by their dealings with the EIB on these matters, Bankwatch, ClientEarth and Global Action on ArcelorMittal have this week lodged a formal complaint with the Secretary General of the European Investment Bank that questions the rigour and ultimate validity of the bank's pre-loan assessment. Read it here and consider the magnetic pull ArcelorMittal seems to have towards public money.

BRUSSELS, Belgium -- The EU's General Court yesterday (2 March) ruled against steel company Arcelor's attempt to challenge the rules governing the EU's emissions trading scheme (EU ETS) and associated claim for damages. The Court ruled Arcelor's action as inadmissible on the grounds that only companies individually or directly concerned by EU acts can bring a legal challenge to them. It argued that Arcelor is "neither individually nor directly concerned by the directive," which applies generally to all operators that it covers, including those in pig iron or steel production.

Read the whole story
Posted by globalaction at 11:40 AM 5 comments:

This report raises critical questions about the ArcelorMittal's complicity in the misuse of the first tranche of approximately US$4.7 million County Social Development Fund in Liberia and warns that the fund could be stolen and misused by politicians in charge to support their upcoming election campaigns in 2011.

Comprising case studies from seven countries ranging from the Czech Republic to India and South Africa, the report reveals new problems emerging around ArcelorMittal’s iron ore mining operations in Nimba County, Liberia, including unclear resettlement plans for local people, a lack of permanent employment from the mine, threats to the Mount Nimba Nature Reserve, and a questionable donation of 100 pick-up trucks. The report highlights that despite ArcelorMittal's rhetoric on social responsibility, it continues to destroy the environment, risk people’s lives and displace local communities

In the wake of ArcelorMittal - the global steel giant's local impacts

globalaction
Global Action on ArcelorMittal is a network of community and environmental groups from around the world who are working to get ArcelorMittal to invest in pollution prevention and health and safety at its steel mills and coal and iron ore mines.